Skip to content
Home » Study of the Cryo Lipolysis

STUDY OF THE CRYO LIPOLYSIS

CHOICE OF INSTRUMENT
Cryo21 is a system of cold therapy (cryoterapi) workig at temperatures between 0 ° C and-10 ° C, with a temperature reached at hypodermisk level of 8 °c.

TARGET
Evaluate safety and efficacy of Cryo lipolysis in the treatment of localized fat deposits reduction.

EFFICITIVENESS ANALYSIS
The patients were photographed and measured through antropomentriske skin fold measurements . In a sub-sample of 10 persoons through blood samples were measured to record the levels of cholesterol, the low density of lipoproteins and triglycerides.

CRYO LIPOLYSIS ACTION ON HUMAN BODY
The suffix “cryo” derives from the Greek word “kryos” which means ice, cold. The adipocytes are sensitive to cold, and the workingtemperature, they undergo into a process called apoptosis; This is programmed cell death involving the breaking of cell membrane, and as a consequence, a spontaneous, slow and gradual emptying of adipose cell. The lipids elimination, localized on the interstitial level, is carried out through the liver, the gastrointestinal tract and the lymphatic system, within fifteen or twenty days.

Apoptosis, by contrast to necrosis, which is a form of cell death resulting from an acute cell stress or trauma, is carried forward in an orderly and regulated way, and leads to an advantage during the life cycle of organism. For example during its intrauterine development, the human embryo presents precursors of “webbed” hands and feet. In order to have differentiated fingers, it is necesary that this cells forming the interdigital membranes die and it happens through an apoptosis process.

Another example: we all know that, in an adult organism, cells number contained in a organ needs to remain constant within a certain margin. Blood and epithelial lining cells, for example, are constantly renewed from their stem ancestors; but the proliferation is balanced by a constant death.

In an adult human body, every day around 50 to 70 billion cells die due to apoptosis. In one year cell mass regenerated is equal to the mass of the body.

All patients were treated for an applications every two weeks over a period of three months.

In every treatment it was used CELLULITE gel, a cosmetic product specifically designed to be combined with cold, for localized fat and cellulite.

In 60% of cases, at the end of session, there was a redness of treated area, which it is however disappeared in a period between 15 and 30 minutes,
without side effects.

RESULTS
All patients shown evident and positive results, observed both subjectively objectively, through pictures of treated areas and consequential skin fold measurement. As result there was a clear adipose tissue reduction with an improving of skin tissues and beauty problems caused by fat and cellulite, increasing of skin tone in hips, buttocks, thighs and abdomen. In some people it was found also a slight weight loss.

The effects were evident since the first treatment, all of them improved with a cycle of six treatments.

EFFECTIVENESS EVALUATION
In all patients they were found appreciable results. The reductive effect of adipose tissue is palpable directly through the skin fold measurement. The reduction in body fat, the compacted tissues and in some cases a slight weight loss become rapid and appreciable result, visible some days after the treatment.

Cryo 21 is a painless and non-invasive treatment, which can also be used when contraindications are present for other treatments (radiofrequency, cavitation) and it acts through a natural and physiological mechanism.

THE ACHIEVED SCORE AS A PERCENTAGE % 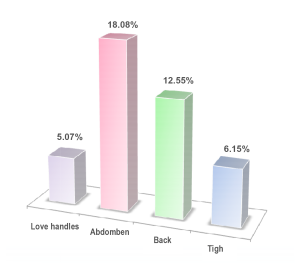 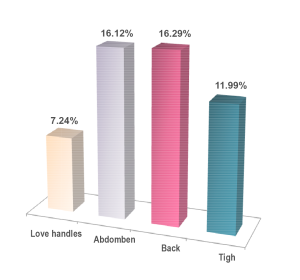 ABDOMEN TREATMENT ON WOMEN IN MENOPAUSE 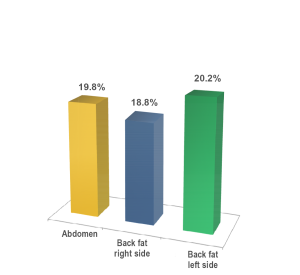 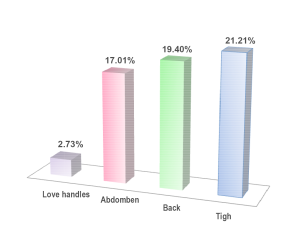 AFTER BUTTOCKS ABDOMEN TREATMENT ON WOMEN